10/01 will be remembered as another day when Polish women were betrayed by people who were given mandate to represent their citizens. Citizens and their legislative initiative. Polish MPs have rejected  the “Save women” bill and referred to the committee  the “Stop abortion” bill. We thought we hit rock bottom, then the anti-choice majority knocked from down below.

80 pro-choice organizations have appealed to the MPs for a fact-based, open-minded and genuine debate in the Parliament. They have provided fact-based arguments to encourage the lawmakers to support a bill that guarantees basic standards in education, conscious parenthood and reproductive health (more about the bill). To stand by women whose rights have been since 25 years neglected. 25 years of the highly restrictive law that is in practice even more repressive as it has restricted an access to legal abortion (more about the effects of the anti-abortion law).

Disillusionment grew with every minute. MPs from a conservative wing were not prepared, they have not read the bill with comprehension. They were not open to cited facts, real-life stories, statistical data. They spoke like Catholic priests (e.g. quoting Mother Theresa) and repeated lies delivered by radical supporters of “Stop abortion” or Ordo Iuris. For the sake of our readers, we will not cite those myths questioning the need of sexuality education or safety of abortion. No one, including Deputy Minister of Health, spoke a word about women’s health, well-being, autonomy or dignity. They have explicitly supported the “Stop abortion” bill which forces women to continue pregnancy in case of fetal impairment, namely to treat them like incubators. To force them to look at the pain, suffering of their children and – in many cases- agony.

Disillusionment reached its height during the voting after the first reading of both bills.

The voting was more symbolic than meaningful. It was about principles – do the MPs take citizens’ bill seriously? Do they provide time and space to discuss them more in-depth and factual in parliamentary committees? The ruling party promised to act in such a way and 58 MPs (out of 226) kept their word, including Kaczyński, Macierewicz and Pawłowicz. This does not mean that they support the project, but at least they allowed for a further democratic step. The two opposition parties promised to support “Save women” promoting themselves as women’s rights defenders. They ordered party discipline.  In vain. 39 MPs did not vote at all (they voted a few minutes earlier in a different issue and left the room, five were still in the plenary room). Three MPs from the Civic Platform voted against referring the “Save Women” bill to the committee.

We can now be sure that we do not need Kaczyński to destroy democracy and human rights.

Useless opposition does it. 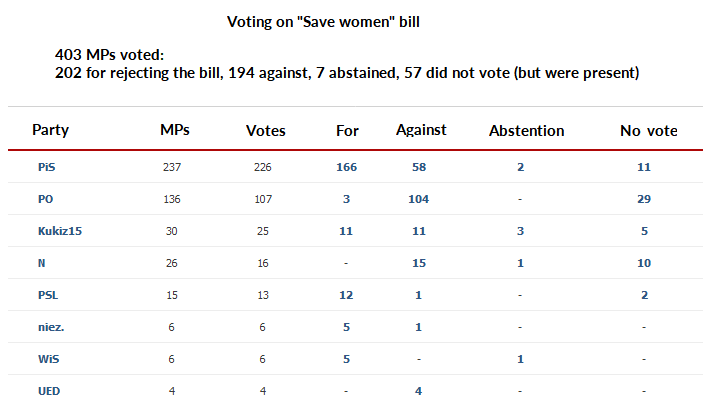 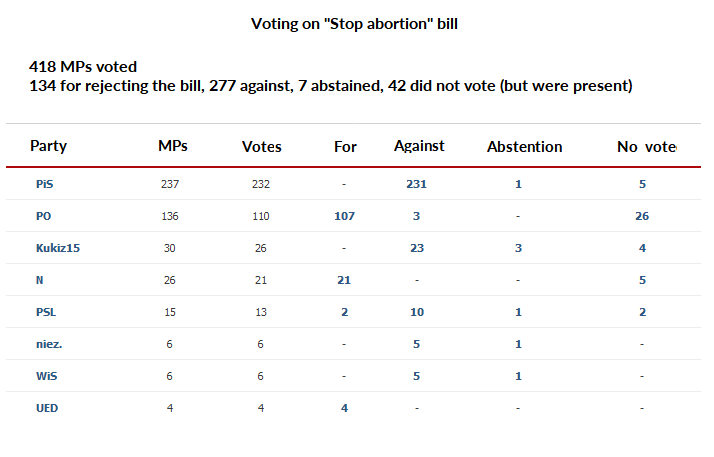