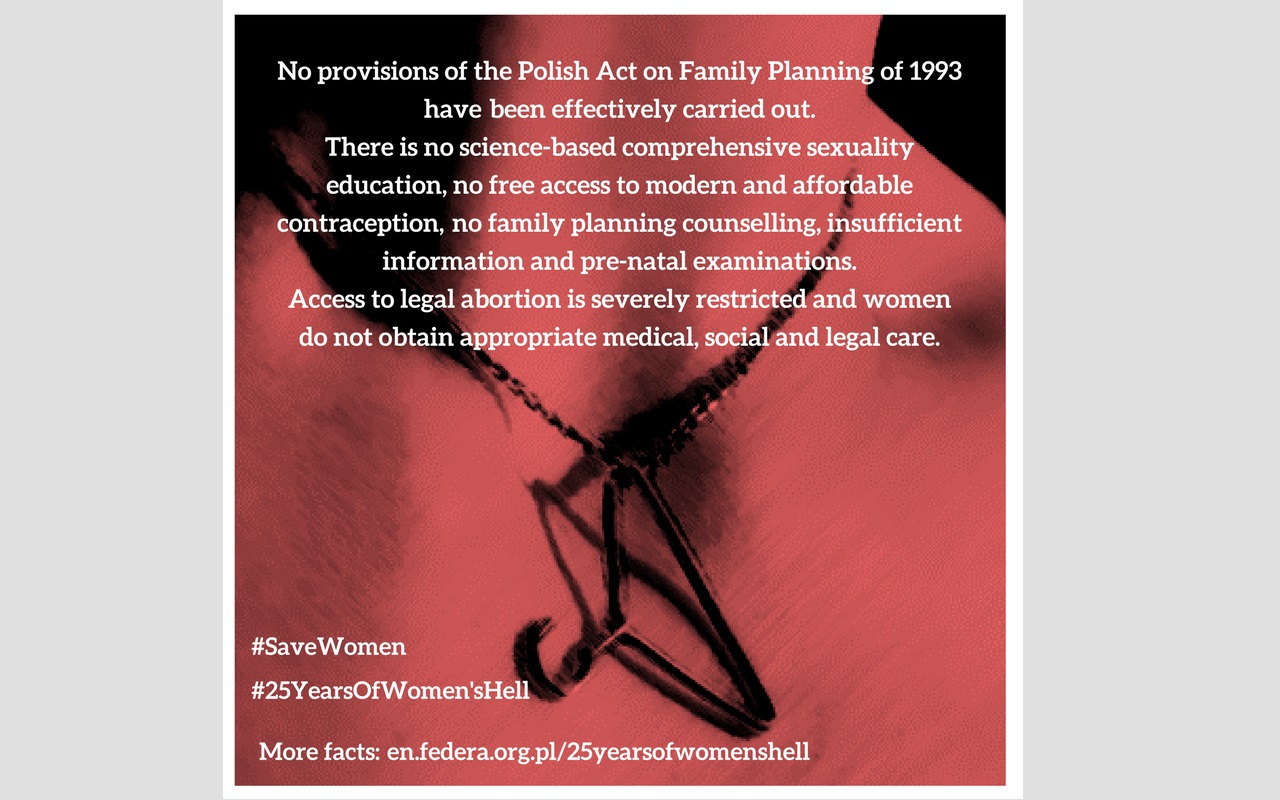 7th January 1993 Act on Family Planning, Human Embryo Protection and Conditions of Legal Pregnancy Termination (later: the Act) has had a detrimental effect on women’s reproductive and sexual health and rights  for 25 years. Due to the anniversary and upcoming debates about two abortion-related citizens’ bills[1] in the Parliament, the Federation for Women and Family Planning has launched  the  #25YearsOfWomen’sHell campaign so as to illustrate  the  fictional character of the Act and its multiple negative effects. Follow memes with the hashtag to learn and share facts about SRHR in Poland.

80 pro-choice organizations have supported and signed the Federation’s statement concerning the “Save women” bill on women’s rights and conscious parenthood so as to appeal to the MPs for a fact-based, open-minded and genuine debate in the Parliament as well as for a vote in favour of the bill. In vain as illustrated by the voting after the first reading of the bill (details here).

#ConstantBreachesOfTheAct  No provisions of the Act have been effectively carried out. There is no science-based comprehensive sexuality education, no free access to modern and affordable contraception, information and pre-natal examinations or family planning counselling, and women do not obtain appropriate medical, social and legal care.

#EffectsOfPenalization  Despite this fact and countless recommendations from the Federation, the Government has never presented any analysis of the Act’s impact. The key consequences are:

#PoorAccessToAbortion Poland has one of the most restrictive abortion laws in Europe[2]. However, hospitals’ arbitrary and unlawful procedures, abusive performance of conscientious objection, lack of proper information for patients, criminalization of abortion, stigmatizing environment and a strong “chilling effect” on doctors lead to the situation when pregnant women have practically a very limited access to safe medical services in public hospitals and consequently seek an abortion in unsafe conditions of so-called “abortion underground” which already has enormous quantity. Women’s access to abortion services can also be impeded by a number of other factors such as a) limited access to information, adequate transport and/or child care, b) living in rural areas or far from Warsaw or other large cities, c) disadvantaged socio-economic position, d) being exposed to various forms of violence. The repressing nature of the law generates many barriers – denial of obligatory certificates of eligibility, questioning their validity, demanding additional documents, unjustified prolongation of formalities, delaying tactics, difficulties finding a doctor without conscious objection, long waiting periods, misinterpretation of the Act, misrepresentation of the gestational age, breach of the principle of confidentiality by medical staff, requirement of certainty of foetal impairment  in disregard of the law which only requires “a high probability”. The lack of timely and effective complaint procedures for women to establish their entitlement to legal abortion services is another key shortcoming.

#AbortionUnderground&Migration According to the estimates, there are 80-150 thousands of illegal abortions every year. Many women seek clandestine and unsafe abortions, self-administer the abortion pill, or travel to another country to access abortion services. In case of clandestine abortions, there is no way to verify the actual qualifications of the person who carries out the procedure, nor the hygiene and sanitary conditions in which abortion takes place. There is neither professional postabortion care, or any real possibility of complaint in cases of medical malpractice, complications or other harm.

Many abortion pills  distributed by Polish venders via the Internet are not subject to any safety control and some drugs of unidentified origin and composition are offered.

There is no comprehensive data on the number of Polish women who undergo abortion outside Poland. Safe abortions abroad are not available to all women due to the cost of the procedure itself (e.g. EUR 400 in Slovakia or EUR 450 in Germany), the cost of travel, the need to take a few days off work, and/or the need to have someone to look after their children.

#ReproductiveInjustice Economically and socially disadvantaged women are most severely affected by the 1993 Act and its implementation, also because they cannot afford private health insurance which provide better access to reproductive health services. Within the public health system in Poland they often cannot afford contraceptives, including emergency contraception. Some try to induce miscarriage by taking different kinds of drugs, using dangerous means or tools, or by hurting themselves. Others may risk their physical or mental health by continuing pregnancy and giving birth.

#RestrictedContraception Organs of government administration and of local self-government have failed to ensure that citizens have easy access to means and methods of conscious procreation. Contraception is not subsidized by the state, apart from one scientifically outdated hormonal medication. There are no family planning centers. Oral contraceptives and morning-after-pills are prescription-only, and such prescriptions are frequently denied by doctors on the grounds of conscientious objection. The relatively high cost of modern contraceptives is compounded by the cost of a private medical consultation as well as any necessary medical tests. Moreover, pharmacists (who are not entitled to conscientious objection)  have been denying women access to contraception and emergency contraception.

#PrenatalTesting Despite the fact that in Poland the access to prenatal examinations has improved somewhat over the past years due to the implementation of the “Programme of Prenatal testing”, women are still not provided with free access to pre-natal examinations and to relevant information as guaranteed in the Act – e.g. due to conscious objection or lack of knowledge among doctors about the programme. The Supreme Audit Office (NIK), in its audit report focused on the prenatal tests, pointed to several major barriers that limit women’s access to prenatal testing, including the minimum age requirement and lack of referral of women meeting the legal requirements. Women in rural areas often face particular difficulties accessing these tests.

#SexualityEducation Ministry-approved textbooks for “Preparation for Family Life” reflect Catholic views and a stereotypical, heteronormative view of the family and gender roles. They reinforce social stigma against abortion and unscientific views of reproductive health. Classes are often taught by persons who lack subject matter qualification.

#StigmatizedRapeSurvivors Women who have become pregnant following sexual assault encounter additional barriers in access to legal abortion services. They often fear reporting the crime and being exposed to harassment or blamed for the crime. Survivors of sexual violence are frequently viewed with suspicion or discouraged to report the crime. Moreover, they often face greater difficulties in obtaining the required prosecutor’s certificate. While there are many criminal acts that might result in a pregnancy[3] and more than 4.000 crimes of this type are noted every year, there are very few terminations of a pregnancy that resulted from an unlawful act (e.g. one abortion in 2016).

#InternationalSupport The phenomenon invisible to the public administration however is clearly recognized by the international organizations and institutions – both non-governmental and intergovernmental. Within 25 years of the anti-abortion law, Poland was repeatedly asked and drawn attention to the problem of abortion underground, its scale, scope  and impact of its existence by the UN Human Rights Council; UN Special Rapporteur on the Right to Health; The Commissioner for Human Rights; The European Court of Human Rights in Strasbourg; Committee Against Torture; The European Parliament; and many others.

#ECHR The European Court of Human Rights  delivered three judgments against Poland identifying violations of reproductive rights related to prenatal testing and abortion. None of these judgments has been implemented, yet the state had to pay compensation in the total amount of 131 000 EUR. Two European Court of Human Rights’ decisions state that Poland violated women’s right to stay free from inhumane and degrading treatment in cases of access to legal abortion and prenatal diagnosis (P. and S. v. Poland and R.R. v. Poland).

[1] The first reading of the “Save women” bill on women’s rights and conscious parenthood will be held on January, 9-10.  Another debate on the “Stop abortion” bill has to take place until the end of February, but the exact date remains unknown.

[2] Pregnancy termination can be performed only by a doctor, when: 1) the pregnancy imperils the life or health of the pregnant woman; 2) pre-natal examinations or other medical conditions indicate that there is a high likelihood of a severe and irreversible foetal defect of the fetus or an incurable illness threatening its life; 3) there are reasons to suspect that the pregnancy is a result of an unlawful act.