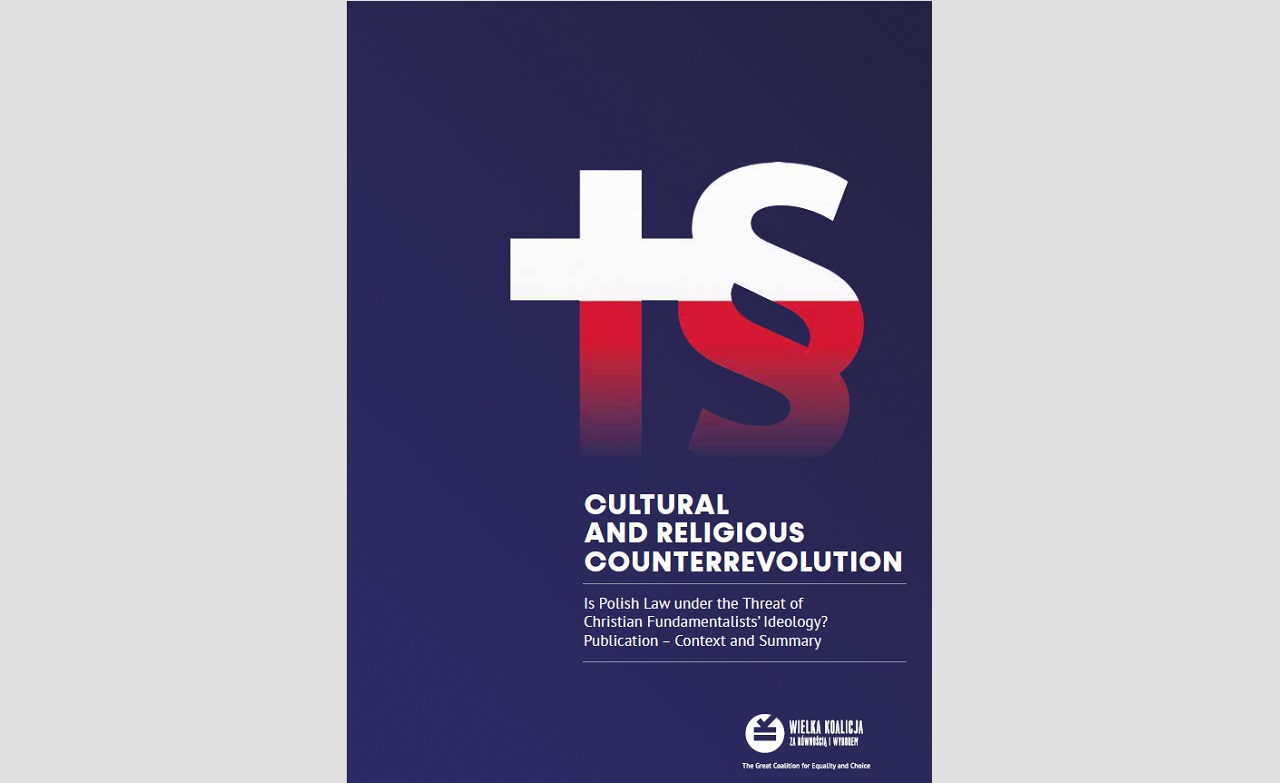 As a member of the Great Coalition for Equality and Choice  we proudly present the English summary of the Coalition’s report about the Institute for Legal Culture Ordo Iuris, which has been fostering  cultural and religious counterrevolution in Poland and beyond.

The publication is the civil society’s response to the growing sphere of activities and political impact of the Institute. It identifies and exposes the activities and strategies of Ordo Iuris. The authors sought to determine the way Ordo Iuris manipulations are produced, to reveal how deceptive they are, and to prove that they are not accidental, but constitute elements of a very coherent strategy.

The civil society is concerned about one specific goal which seems to motivate the activity of Ordo Iuris which is to bring such changes in secular Polish law so that it would reflect restrictively interpreted principles of Christian religion. The authors of the publication are very preoccupied by how they distort the understanding of some concepts that we thought were already clear, achieved and well established in the Polish constitution and human rights protection system. Extremely worrying is the growing political power and influence they are gaining: many of Ordo Iuris members/former members or experts are political actors on prestigious positions.

Click to download the summary of the report “Cultural and Religious Counterrevolution – Is Polish Law under the Threat of Christian Fundamentalists’ Ideology?“

Article in “Parliament Magazine” about the ultraconservatives in Poland with quotes by Urszula Grycuk, Federation’s international advocacy coordinator.

Thematic scope of the publication:

Ordo Iuris activities (1 article for each):

The starting point is the report of the European Parliamentary Forum on Population and Development “Restoring the Natural Order: The religious extremists’ vision to mobilize European societies against human rights on sexuality and reproduction”.

The four strategies identified in the EPF report the authors translated into the Ordo Iuris modus operandi and Polish legal environment. The strategies are the following:

1) Reversal strategy involves using the weapons of opponents and turning them against them. This strategy takes several forms. One of them is to refute the opponents’ claim to ‘victim status’ by saying for instance that women and LGBT+ people are not discriminated against. The next stage is for religious people or Christians to position themselves as the new, real victims of the Cultural Revolution. By framing the conflict as one of defenders of faith versus intolerant, cultural revolutionaries, the concept of discrimination and intolerance against Christians, or ‘Christianophobia’ will blossom. With the use of this strategy, the social power structures become reversed and the majority starts usurping the status of the discriminated group.

2) The Strategy of Takeover involves framing the issues of the conservative agenda in terms of ‘rights’ which leads to takeover of the human rights language. The key element of the strategy is what the progressive community has labelled as the ‘colonization of human rights’ – namely, the contortion of religiously-inspired positions on sexuality and reproduction to artificially resemble classical human rights language. The examples of rights newly created by the radicals include the right of fathers to prevent the abortion of their children; the right of parents to be the first educators of their children; the right of children to receive correct information, not propaganda on sodomy. In Poland, this strategy is often used to confer rights on a foetus and a family unit that appear to become distinct subjects of rights within the interpretation proposed by the Polish fundamentalist organisations.

3) The Strategy of Maligning and Smear Campaigning involves slurring and insulting opponents, and therefore people and organisations that do not support the religiously motivated changes in legislation. These opponents are identified as the abortion lobby, the lesbian and gay lobby, the radical feminist lobby, and militant atheists. The strategy is based on the constant criticism of the opponents and accusing them of preventing substantial debate, using aggressive means, being violent, which – as a consequence – leads to delegitimising their actions and even existence. This method draws on one of the negotiation strategies, the so-called ‘broken record’ strategy which involves repeating the same message or a piece of information for several times and no matter what the other party says. It does not allow to enter any dialogue; it is entirely about pushing forward a specific message. This strategy is clearly visible in the language used against non-heterosexual people in general. They are constantly slandered, presented as immoral, aggressive, threatening children and adolescents, e.g. they fall victims of untrue language clusters such as ‘gay and paedophile’.

4) The Strategy of Legitimisation of Individuals and Organizations comes down to gaining the status of a recognized interlocutor on the international level. This strategy involves creating the image of a specialist and professional organization which – through its membership in the internationally recognized forums – legitimizes its own voice in the debate. To achieve this goal, representatives of extremely conservative organizations apply for accreditation in the international institutions such as the United Nations or the Council of Europe. They are also active within the European Union institutions. Apart from other efforts, they actively operate within the institutions structures to be able to influence the procedures related to the appointment of international judges and other representatives. Ordo Iuris effectively undertakes such activities. The organization obtained a consultative status at the UN18 and is actively involved in international processes, pushing forward their vision of a society subordinated to religious commandments.

Apart from the strategies diagnosed and described in the EPF Report (mentioned above), the authors of this publication identified two additional strategies that shall be taken into consideration.

5) The Strategy of Language Manipulation is based on avoiding neutral terms and replacing them with one’s own, loaded vocabulary. Instead of an ‘embryo’ or a ‘foetus’, the anti-rights groups use expressions such as an ‘unborn child’, instead of ‘abortion’ – ‘murder’, instead of ‘in vitro’ – ‘eugenics’, etc. While introducing definitions different from those that have been used in the common language and the legal language so far, the anti-rights groups additionally incorporate expressions suggesting that their extremist position is beyond any question. Examples of such expressions are: ‘beyond any doubt’, ‘it is obvious’, ‘everyone knows’. Moreover, the strategy of language manipulation consists of using strongly judgemental expressions that help create a vision of the forces of good opposing the forces of evil. It is based on antonyms such as ‘honest – dishonest’, ‘moral – immoral’. Representatives of Ordo Iuris often provide unconfirmed information, negate facts and experiences of people, or use them selectively: for example, they claim that women allegedly suffer from the so-called post-abortion syndrome. Another example of deliberate departing from the truth (confirmed by the internationally recognized scientific publications), is a claim that homosexuality is connected with paedophilia.

6) The Strategy of Legal Manipulation. This strategy involves presenting legal analysis of a given issue in a selective manner or with violation of the principles of legal interpretation. The goal is to distort the legal understanding of concepts such as discrimination, freedom of conscience and religion, and private life. Legal manipulation correlates with the strategy of legitimisation. A person who formally meets all the requirements for being an expert (a lawyer, a professor, etc.) interprets a legal concept, a legal act, or a court ruling. In this interpretation, however, he/she often adopts the following measures: omitting inconvenient rulings; incorrect citation of sources which makes their verification difficult; juxtaposing the thesis of court judgement with a dissenting opinion on an equal footing (without a relevant description or indicating the hierarchy between texts); citing non-binding positions of the UN Commission together with official positions such as General Observations or rulings. Such manipulations make the incorrect data look convincing. Most importantly, texts written with the use of this strategy are extremely difficult to ‘decode.’ Their authors operate on the verge of producing fake news. While presenting their own interpretations of norms or judgments, they do not include all the data, but only carefully selected materials that fit their thesis. Therefore, we are not dealing here with legal interpretation and the argumentation, lawyers are accustomed to and perform in their work on a daily basis, but with journalistic writing that not only omits the principles of legal interpretation, but is often simply unreliable.