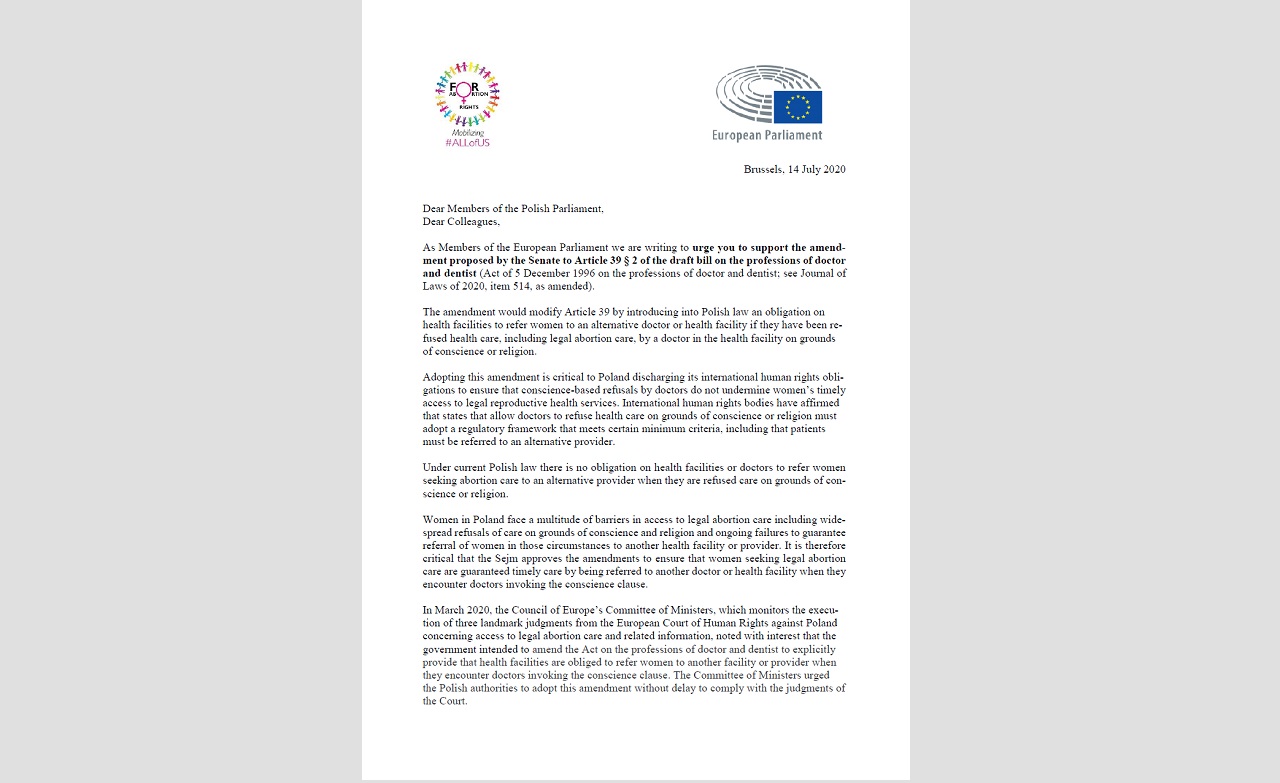 At stake here is a provision of Article 39 § 2 which in case of a refusal to perform abortion by a doctor who relied on the conscience clause, obliges the hospital to refer to another hospital or institution which could perform the service. If this provision does not become a part of this law, women will be forced to look for hospitals who would perform legal abortion on their own, without ANY institutional assistance.

This is another step further limiting the rights of women in Poland in accessing SRHR services. Access to legal abortion is a guaranteed service under the public health scheme. Deleting this provision strips women of practical access to abortion services guaranteed by law. As a result, women who might be already in a stressful situation will be forced to travel the entire country, from hospital to hospital requesting access to abortion. Given that only 10 % of hospitals provide legal abortion services in Poland, it makes it extremely difficult for women. It will further outlaw abortion, push it underground seriously affecting rights and safety of women in the country.

Deletion of this provision is a blatant violation of the recent call for action from March 2020 addressed by the Council of Europe’s Committee of Ministers who monitors (lack) of progress in the execution of 3 judgments of the European Court of Human Rights against Poland concerning important aspects of access to basic SRHR services.

The recommendation calls among other things: “to provide explicitly that a healthcare provider has an obligation to provide information to patients on how to obtain healthcare services which were not performed due to the use of the conscience clause and strongly encouraged the adoption of such an amendment without further delay”. Moreover, it violates numerous recommendations of UN bodies and institutions addressed to the Polish government to remove all the legal and social barriers for women in access to abortion.

The Federation for Women and Family Planning has been advocating for the referral obligation for many years. Given the latest developments we have appealed to MPs and mobilized societal support by means of a petition that was signed by almost 7 thousand people.

The Federation informed international partners and European institutions about regressive decisions of the Polish Parliament.  Also international community has been appealing to the Polish decision-making to introduce into Polish law an obligation on health facilities to refer women to an alternative doctor or health facility if they have been refused health care, including legal abortion care, by a doctor in the health facility on grounds of conscience or religion.

The Council of Europe Commissioner for Human Rights urged the President of Poland to veto the amendments adopted by the Sejm and call on the Polish Sejm to review the text in order to bring it in line with the human rights standards of the Council of Europe and Poland’s obligations. The whole statement:

“I regret that the amendments to Poland’s Medical Professions Act adopted on 16 July by the lower house of the Polish parliament, the Sejm, fail to explicitly oblige healthcare providers to refer patients to an alternative and willing provider in the event of the refusal of a medical service on grounds of conscience”, said today the Commissioner.

“The repeated removal by the Sejm of this key provision, which had been put forward by the Polish government and received the support of the Senate, goes against my recommendation to urgently address the shortcomings in Poland’s legal and institutional framework of conscience-based refusals of abortion care, which continue to seriously hamper the practical enjoyment by women and girls in Poland of their sexual and reproductive health and rights. It is also at variance with the recent decision of the Committee of Ministers of the Council of Europe, which, in the framework of the supervision of the execution of a judgment of the European Court of Human Rights against Poland, strongly encouraged the adoption of such a provision without further delay.”

Here you can read the letter by the All of Us Group in the European Parliament.

“Failure by the Sejm to adopt the amendment would perpetuate ongoing violations of Poland’s international human rights obligations to guarantee women access to legal abortion care and ensure that doctors’ refusals of care do not undermine access to care to this care and would further undermine compliance with the judgments of the European Court of Human Rights. We therefore strongly urge you to support this important amendment.”

Call to Vote in Favour of Referral Obligation 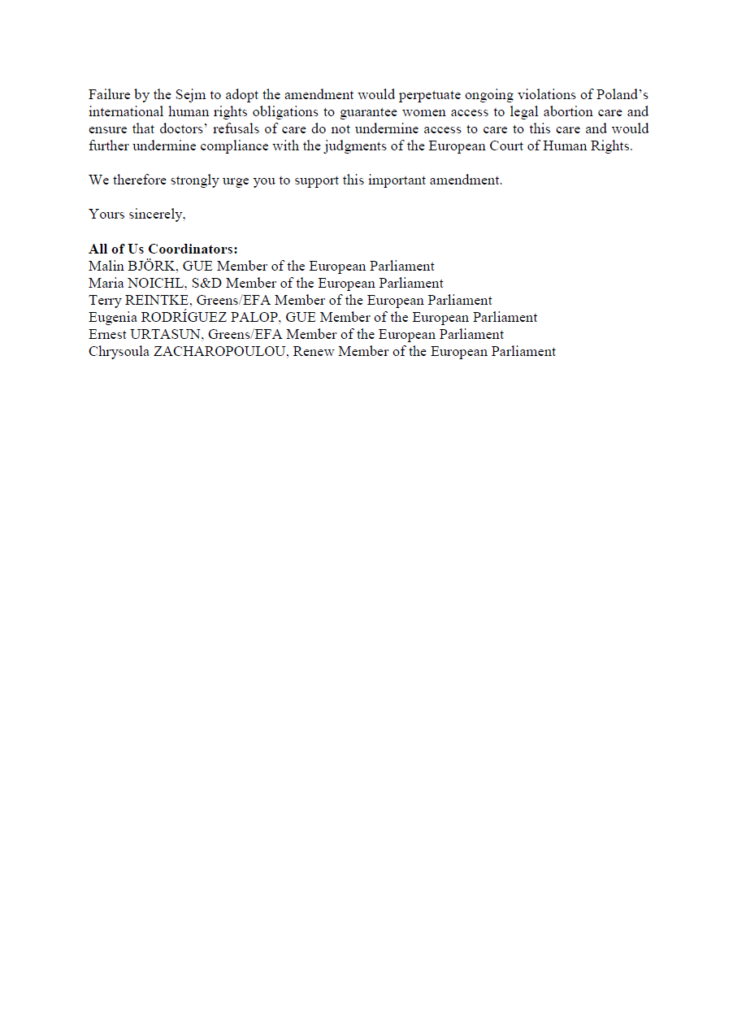