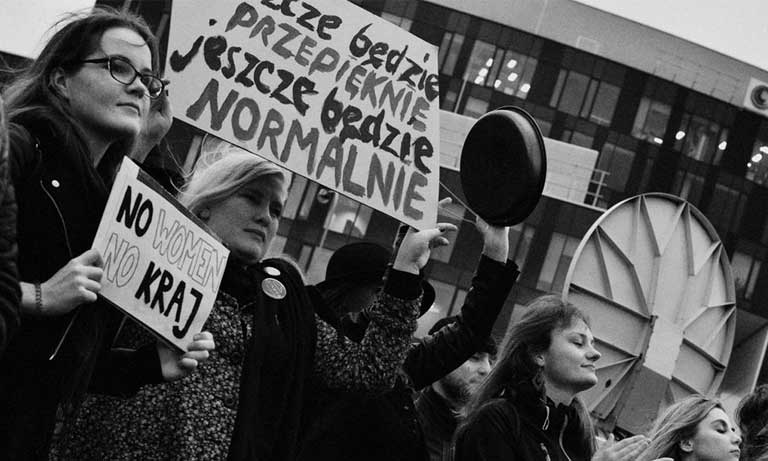 On Friday, September 23rd, the Polish Sejm sent to further proceedings draft legislation aiming to introduce a total ban on abortion and criminalize women for terminating pregnancies with up to 5 years of prison. Women and doctors could face prison if convicted of causing what the proposed bill called “death of a conceived child”. Moreover doctors would be discouraged from doing prenatal testing, particularly if that carried the risk of miscarriage.

Major mobilization among Polish women and civil society organizations resulted in a “black protest” (#czarnyprotest). Launched on the day of the reading of both bills it became a leading theme of Polish women’s fight for abortion rights.

The culmination of women’s solidarity and mobilization was October 3rd when women went on a strike – did not go to work, schools, took a day off and went to protest in the streets in Warsaw and other cities in Poland. In total 100 000 people protested against the total abortion ban in 143 locations in the country. This mass mobilization caught great interest in international media and was widely captured via social media with #czarnyprotest, #strajkkobiet, #solidaritywithpolishwomen (Reuters, Buzzfeed, Independent). Supporters of Polish women protested in cities across Europe – i.e. in Paris, Oslo, Berlin.

On Wednesday afternoon the Senate announced a suspension of their proceedings  and their proposal on a “compromise” to the proposed abortion ban, and claimed that protests against the bill had given ministers “food for thought”. They also assured that Poland will not criminalize women nor ban abortion in case of rape or incest and in situations when the pregnancy is risk to women’s health and/or life

Around 6 pm on the same day the Commission for Justice and Human Right held a session and recommended the Parliament to reject the “Stop Abortion bill”. This caused a lot of criticism as the meeting was not planned in advance hence a second reading of the bill took place very late at night. On Thursday morning the process ended with the dismissal of this bill with a majority of 352 votes. 58 MPs were in favour of further proceedings, 18 abstained from vote. Beata Szydło, Polish Prime Minister, announced a future bill that will support all women experiencing so called “difficult pregnancies”. She also announced the creation of a programme of support for families raising children with disabilities and start of a national campaign in support of “pro-life” values.

This is a won battle – so far. We are certain that the anti-choice groups and the Catholic Church will not step down this easily and another anti-choice bill banning abortion in all cases (but not criminalizing women) is already pending for further proceedings. The ruling Law and Justice party also announced their readiness to start working on their own bill which will ban abortion in case of fetal damage. The Catholic Church announced that they do not approve of criminalizing women and put a green light for further attempts to ban abortion in case of fetal damage. This may be another battle we will have to face, together with attempts to restrict access to emergency contraception.

The current law on abortion in Poland, even more restrictive in practice than in theory, the so called “abortion compromise”, is not a solution to realisation of women’s reproductive rights. The series of ongoing protests which began in early April this year were a chance to advocate for liberalisation of the law (see the “Save the Women” civic proposal) – the only real option to ensure women’s sexual and reproductive health and rights and their human rights.

This victory on abortion has empowered Polish women – we’ll never be the same, said Krystyna Kacpura, Executive Director of the Federation for Women and Family Planning to the Guardian. Years of pro-choice advocacy, public mobilization, grassroots work, women’s solidarity and working across movements and various groups has given fruits, which can make a change.