Since 2015 when the Law and Justice Party has come to power, atmosphere around women’s rights and freedoms, including the right to abortion, is very tense. In January 2018, the MP referred a draft law banning abortion in case of foetal impairment to the committee for a further discussion. Following massive protests, the decision makers seemed to put “Stop abortion” into “a legislative freezer”.  The anti-choice group continued to put pressure on the politicians with letters, tweets and pickets in front of the Polish parliament. Without effect, until the Polish bishops intervened. On the March, 14 the Polish Episcopal Conference appealed for the bill to be proceeded. A day later, the Head of the Committee on Justice and Human Rights announced that the opinion on the draft law will be issued on the next Monday (19.03). This illustrates the enormous power of the Church and the strong resistance of the politicians  to put human rights over their own interests in the light of the upcoming elections in 2018 (local) and 2019 (national). The opinion of the committee is necessary for another committee that is supposed to proceed the bill (Committee for Social Policy and Family). In response to bishops’ political interference, the Polish Women’s Strike is mobilizing women to protest in front of dioceses and curia. The Federation for Women and Family Planning has appealed to the members of the Committee to issue a negative opinion. Nevertheless members of the committee were reluctant to consider women’s rights perspective during the debate and  they have suddenly voted for closing the list of speakers. As a result, many activists who came for this debate from other cities were excluded and did not have a chance to voice their concerns and arguments. The Committee has approved the draft law. The next step is a debate in the Committee on Social Policy and Family. The exact date remains unknown, this point may be put on the agenda in the very last moment. Therefore, we have to assume that politicians will proceed the bill as quickly as possible and that the vote in the Parliament may take place on Thursday (22.03). Friday was officially called a day of the mass protest and feminists from all over the country were invited to come and participate in rallies and demonstrations against this draconian law. More about the event #BlackFriday.

Poland has received many proofs of international solidarity, including statements by the UN human rights experts, a group of MEPs, the Council of Europe Commissioner for Human Rights, and over 200 NGOs from across the globe (more about their statement). 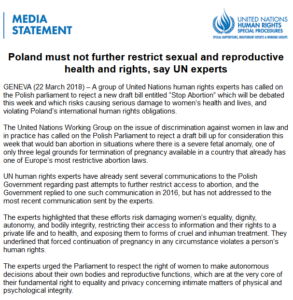 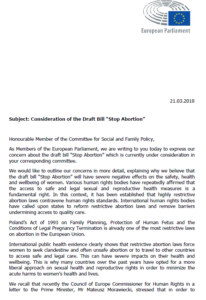 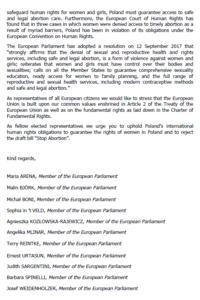 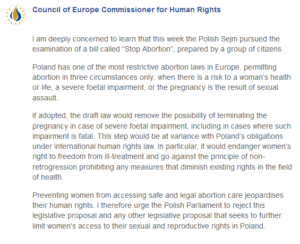 Restricting abortion by means of the parliament is only one of the three strategies employed by the ruling party. The second path runs through the Constitutional Tribunal. More here. A group of extremist MPs, mainly from the ruling party Law and Justice (PiS) and Kukiz’15, submitted a motion challenging the constitutionality of abortion in case of a severe and irreversible foetal defects. They claim that it interferes with other constitutional values (respect and protection of human dignity, the legal protection of the life of every human being). The non-sovereign Tribunal promised to rule on this case in full composition, however no steps have yet been made.  On February, 28 the Legislation Committee issued (by vote 10:2) a positive opinion about this motion, emphasising that neither women’s freedom nor her mental health can act as arguments for the right to abortion in case of foetal impairment.

The third way was developed by Ordo Iuris, an ultraconservative organization of anti-choice lawyers linked to the ruling party. They drafted a bill granting foetuses patients’ rights, i.e. right to medical services and perinatal care. This amendment is aimed at “empowering an unborn child in the Polish law as a person and as a patient”.  This may seem innocent, but in fact it is deathly dangerous in the light of current practices. Women are commonly denied an access to prenatal testing or legal abortion for the sake of the foetus (even when the pregnancy imperils their health and life). We are convinced that such a legal change will objectify women by imposing procedures that value foetuses over women. As commented by a doctor, this would turn into a inhumane treatment and perception of women as a biological environment for the foetus.  It will also force doctors to pursue a futile medical care, which is unethical as it brings physical, emotional, spiritual, economic, or ethical hardship and harm. The draft law was submitted to the Ministry of Health and to the Commissioner for Patients’ Rights.

To make matters worse, Ordo Iuris is deeply involved in many policies in various Ministries. Since children and teenagers belong to their main target groups, they have influenced the Ministry of National Education (MEN) to put a greater emphasis on the role of traditional, nuclear family (as the only valid option) in the curriculum of “Family Life Education”. Furthermore, their manipulative report “Save our children” identifies and slanders 29 NGOs that have conducted extracurricular classes at schools. They present organizations providing education about human rights, sexuality, LGBT+ rights, antidiscrimination (e.g. Amnesty International) as a threat to children, Catholic values and morality. In response MEN cautioned headmasters not to invite NGOS without parents’ consent.