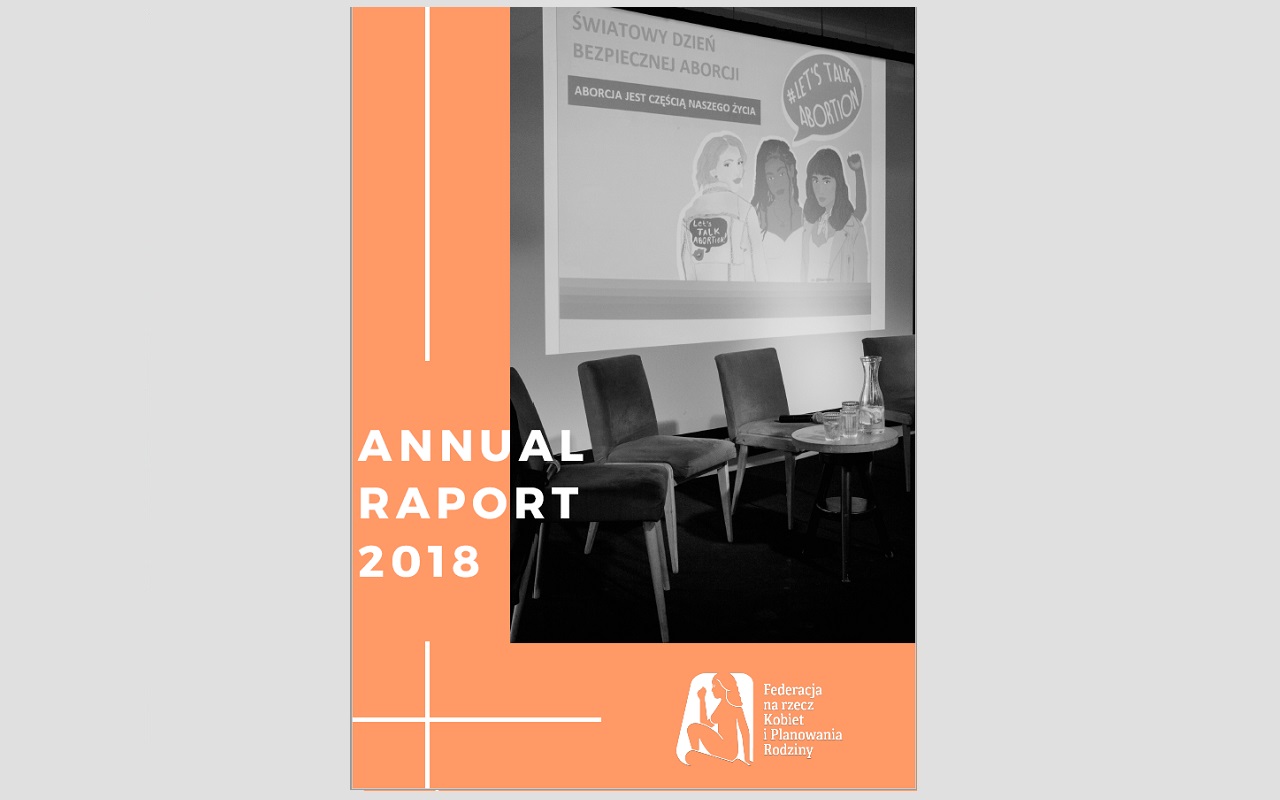 The year 2018 brought new barriers in access to reproductive health services, but also further consolidation of social forces against backlash and attacks on the fundamental rights of women and various disadvantaged groups. The beginning of the year was a blow to the pro-choice community, which had to witness the mediocre parliamentary debate on two civic draft bills – the progressive and comprehensive “Save Women” and the barbaric “Stop Abortion”. The embarrassing discussion and the fact that the “Save Women” draft bill was rejected, while the “Stop Abortion” one was referred to the committees, sunk faith in the opposition, the purposefulness of a bottom-up legislative initiative, and the point of representative democracy. This event has also sparked mass protests in January, March, and July, when the draft bill was being worked on. Under the social pressure, the Modern parliamentary club submitted its own draft bill on conscious procreation along with the “Save Women” draft law as a parliamentary bill. The Civic Platform announced a “package for women” that retains the current anti-abortion law and adds “extra issues such as IVF, prenatal testing, contraception, and sexuality education.”

March 2018 will undoubtedly go down in history. The history of Polish democracy (impressive, quick mobilization,) of feminism (activists’ voices and strategies) and of politics (shameful behavior of MPs in the Committee of Justice, servilism towards the Episcopate of the Catholic Church, demands of real separation of Church and state.) In reaction to the bishops’ interference in politics, the Polish Women’s Strike organized #WordOnSunday demonstrations in front of curia and dioceses all over the country. The Committee’s favorable opinion and thus the risk of swift passing of the bill, all in the same week, mobilized various communities to organize and promote mass protests under the slogan #BlackFriday. According to the organizers’ estimates and unofficial police statistics circa 90,000 people attended the Warsaw march.

In July, under the pressure of the proposal’s initiator, Kaja Godek and the Episcopate, the parliamentary Committee of Social Policy and Family began working on “Stop abortion”. It triggered a wave of resistance – the Polish Women’s Strike and the Warsaw Women’s Strike announced protests in front of the Sejm in the capital, as well as in 16 other cities in Poland and four abroad. The Committee eventually decided to refer the draft bill to an extraordinary subcommittee, which consisted of five Law and Justice MPs, two Civic Platform MPs, one Modern MP, and one Kukiz’15 MP. No meeting date of the subcommittee was set until the end of the year.

In 2018 the Constitutional Tribunal failed to review the proposal of a group of MPs to examine the constitutionality of the right to terminate pregnancy due to fetal impairment. In November, just before the one-year anniversary of the proposal’s submission, the extremist MPs and anti-choice communities led by Kaja Godek exerted pressure on the Tribunal to issue a decision.

The Polish fundamentalists did not limit their activities to the attempted imposition of the total abortion ban (an indirect result of a possible withdrawal of the embryo-pathological premise from the current Family Planning Act). The extremely conservative lawyers from the Ordo Iuris Institute for Legal Culture slandered the non-governmental organizations advocating for human rights or sexuality education calling them a “threat to children,” interfered in political processes and lobbied for anti-human rights proposals in committees and ministries. They imposed harmful ideology breaking the constitutional rights to privacy, freedom of conscience, protection of health, or autonomy[1]. Furthermore, they demanded  that fetuses and embryos be granted patient’s rights and be treated as “fully-fledged medical service beneficiaries.”

The authorities still ignore calls for the improvement of access to modern birth control methods, which situates Poland at the very end of the Contraception Atlas ranking with the result of 44.8 percent. The following reasons of such a poor result can be pointed out: the next-generation hormonal birth control pills are not refunded by the National Health Fund, there is consent for the ideologically-based refusals of issuing prescriptions on contraception, lack of family planning counseling, and lack of education on modern contraception during the “Preparation for Family Life” classes at schools.

Despite our interventions, the National Health Fund failed to undertake steps in order to improve the accessibility of IUD insertion service (in 2018 only 10 percent of entitled facilities performed the procedure more than ten times). As a result patients are either not informed about this guaranteed service and bear the high costs, or encounter unlawful refusals.

Yet again, the draft bill aiming to enable minors to visit medical specialists on their own was discarded. The current situation weakens youth’s autonomy and negatively impacts their health.

Another year of fundamentalist propaganda and anti-women politics has deepened the problem of inaccessibility to services such as birth control prescriptions, prenatal testing, or the unenforceable right to legal abortion, because of the abuse of the conscience clause. Pharmacists also unlawfully invoke this clause, simultaneously advocating in favor of an official granting them the right to conscientious objection. The sad finale might take place in 2019. Over the course of the last year, the Ordo Iuris Institute and their allies undertook numerous legislative attempts in order to extend the conscience clause to another medical professions[2].

Political activities of the conservative parties and the Church negatively impact the issues of sexual health. The number of HIV/AIDS infections rises each year, contrary to the level of knowledge on infections or expenditure on prevention. Half of people living with HIV is unaware of their infection and can be a threat to other. Teenagers are especially prone to STIs, as they are unable to obtain comprehensive sexuality education in schools, because of the prevailing ideology of those in power. As a result, the youth does not know how to prevent sexual violence, STIs, or unwanted pregnancy. In a survey conducted by teenzone.pl, as much as 22.6 percent of Polish teenagers admitted to having had an STI at least once. Speaking on education, let us remember the governmental program for  high schools “Towards maturity,”  which was based on information that are false and inconsistent with the current medical knowledge, for example “postcoital contraception is are essentially abortion medication,” or “easy access contraception among other things boosts libido, increases the number of teenage pregnancy and HIV infections.” [3] Alternative sources of information, such as workshops conducted by NGOs have necessarily a limited reach and thus are not able to solve the problem systematically.

When it comes to optimistic and inspiring elements of 2018 we can certainly mention Anja Rubik’s #sexed campaign, with the participation of numerous experts, including those from the Ponton Group, as well as the Federation. Hopefully, the campaign will make it easier for young people to access information vital for their health, safety, and sexuality.

The unfortunate political climate therefore does not discourage many NGOs, groups, or individuals who tirelessly fight for the respect of reproductive health and rights. The Doctors for Women initiative, which helps women to obtain a prescription for emergency contraception for free, is growing in strength, and has joined the Federation. The cooperation between feminist and human rights groups and the anticlerical community is strengthening in order to weaken the power of the Church, implement secularity, and stop the Episcopate from interfering in the matters of health and rights. Thanks to the protests initiated by the parents of people with disabilities, the social awareness on the barriers and problems they face has significantly risen. Those include the lack of autonomy, when it comes to decisions on their bodies, sexuality, and reproduction for instance forced sterilization, abortion and administration of contraception.

On a positive note, it should be highlighted that another year of a national debate on abortion regulations has led to a historic increase in support for the real accessibility of abortion. As shown in a poll conducted by IBRIS and commissioned by the Federation on the occasion of the International Safe Abortion Day (28/9), 69 percent of respondents agree that women should be able to decide on the termination of pregnancy up to 12 weeks. What is more, thanks to actions of the Federation and the “Away From the Hospital” campaign, the resistance against exhibiting bloody anti-abortion banners in public spaces is growing among the Warsaw youth. Our poll has revealed that 83 percent of respondents disapprove of such displays, and 73 percent would like them to be banned. This is also a result of filing offence notifications, court judgements, and appeals of young people to the Bureau of Education to officially condemn such activity, or to delegalize the Pro Right to Life Foundation. Furthermore, according to our poll, 92 percent of Poles oppose the state’s interfering in individual decisions on reproduction, which stands in contradiction to steps undertaken by the government to restricts autonomy and introduce solutions based on ideology and religion, instead of knowledge and law.