In April and May pro-choice billboards with the slogan “Women in Poland demand legal abortion” have appeared in different cities and towns across Poland. This campaign was organised by an informal women’s group, which managed to gather financial means in a crowdfunding campaign. The organizers and supporters wished to protest with these billboards against manipulative messages of the anti-abortion fundamentalists and to make their voice in the public sphere more distinctive. The billboards were meant to support pro-choice people in smaller, conservative towns and to empower them to show that they possess agency and can change the reality. Their action reflects a solid and growing support for the liberalization of the anti-abortion law. 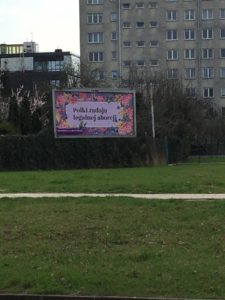 The latest opinion poll conducted by IPSOS in cooperation with OKO.press, the online portal run by investigative journalists, reaffirms some continued trends, but it also surprises with new observations. The most crucial conclusions: