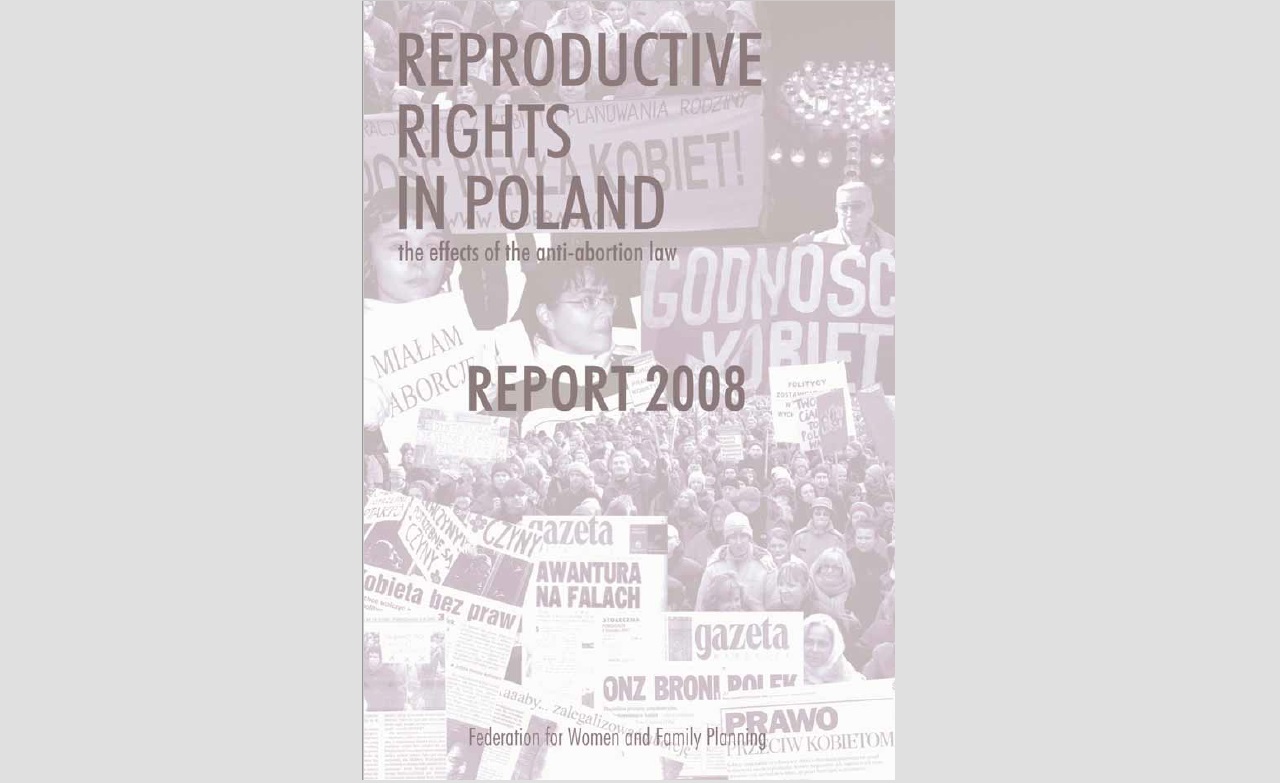 This report on the monitoring of reproductive rights in Poland was created in the framework of the project financed by the European Commission and realised by the Federation for Women and Family
Planning, entitled Proactive monitoring of women’s reproductive rights as a part of human rights in Poland. The report provides a comprehensive overview of reproductive rights in Poland. It deals with
the legal issues involved, and the analysis of the Polish legal regulations on reproductive rights (E. Zielińska) deserves special attention, as well as the review of court cases conducted in Poland and
at the European Court of Human Rights regarding the lack of access to termination of pregnancy in Poland (A. Bodnar). The report shows the real effects of the current law and social policy with regard
to termination of pregnancy, family planning and sexual education (W. Nowicka). Through the use of qualitative research, the report also presents the attitude of the health service to the issues mentioned
above and the role of doctors in restricting access to services connected with reproductive health (A. Domaradzka). Moreover, the report publishes guidelines for Poland from international institutions,
which aim to improve the respect for human rights regarding reproductive health issues.

“Reproductive rights in Poland” – report of 2008

Various research perspectives – sociological, legal, empirical research and analysis of available government, police and medical sources – present a very cohesive but grim picture of the extensive and systematic violation of women’s rights. The Act, which is exceptional for European conditions, fundamentally limits women’s rights to life, health, dignity, self-determination, autonomy and privacy. At the same time, the Act is realised in practice in an even more restrictive way and has created a political and social climate hostile to women’s rights in the sphere of reproduction, leading to an
almost total ban on abortion.

Public institutions, whose representatives are fully conscious of the violation of human rights in this sphere, ignore social problems, including various pathologies caused by the repressive and criminogenic
law. At the same time they fail to meet Poland’s international obligations arising from the ratification by the government of the human rights conventions – a violation drawn attention to for years by international institutions created to monitor human rights. Moreover, the hostile atmosphere to women’s rights created by fundamentalist politicians has created conditions for undertaking new legislative initiatives with the aim of tightening the abortion regulations. A striking example is the recent attempt by League of Polish Families (LPR) to introduce a regulation in the constitution on the protection of life from the moment of conception. LPR’s draft amendment almost led to a total ban on the termination of pregnancy in the Polish legal system (text on the constitutional debate by E. Zielińska). Although the initiative was rejected (it failed by a small number of votes), similar attempts have already been announced for the future.

The debate which accompanied LPR’s draft amendment displayed growing acceptance, particularly among legal and medical experts, for a significant lowering of women’s rights protection. In particular
the right of pregnant women to health is seriously endangered, which can be seen clearly in the example of the case of Alicja Tysiąc. The status of pregnant women has been reduced by the opinion-
forming legal circles, to an “environment for the development of the child” in which “mental comfort(…) during pregnancy and childbirth does not have a significant enough character to justify
the termination of the life of the conceived child”. In addition, in the opinion of medical experts, “the situation of women who find out that the foetus has an incurable defect is so traumatic that sometimes it is better that the patient should be informed about this only after birth” (A. Domaradzka).  These statements are not only testimony to the total instrumentalisation of women, reducing them to their reproductive function, but also prove the lack of elementary sensitivity to the difficult situations which are often connected with pregnancy. The drama of a woman carrying a foetus with a serious
genetic defect has been reduced by the lawyer to a “lack of comfort”, whilst the doctor, who theoretically understands what a difficult experience this can be for the woman, can only propose that
she carries the pregnancy to the end.

Although there is a high level of social consciousness about the negative effects of the restrictive act, there is less acceptance of women’s right to self-determination. Hypocrisy towards abortion is growing – on the one hand, there is a thriving underground and increasingly widespread use of abortion pills, which can be obtained without even leaving home by using a computer with Internet
access. On the other hand, there is the total ban and the pseudo-moral attitude of a growing group of policy-makers for whom morality can be reduced mainly to the so-called protection of life, on
condition that it is conceived life. The harm to women forced into heroism against their will, i.e. giving birth in every situation, does not disturb the morality of the majority.

There is a widespread indifference towards women for whom pregnancy is a problem and also a growing religious fanaticism and renaissance of so-called traditional values, according to which the main
role of women is motherhood. Although this can in the near future lead to a further tightening of the law, we believe that this report will serve in a small degree to halt these negative tendencies. Women
in Poland should regain their rights to self-determination in all issues connected with sexuality and reproduction as soon as possible. We must not forget that women’s rights are human rights.