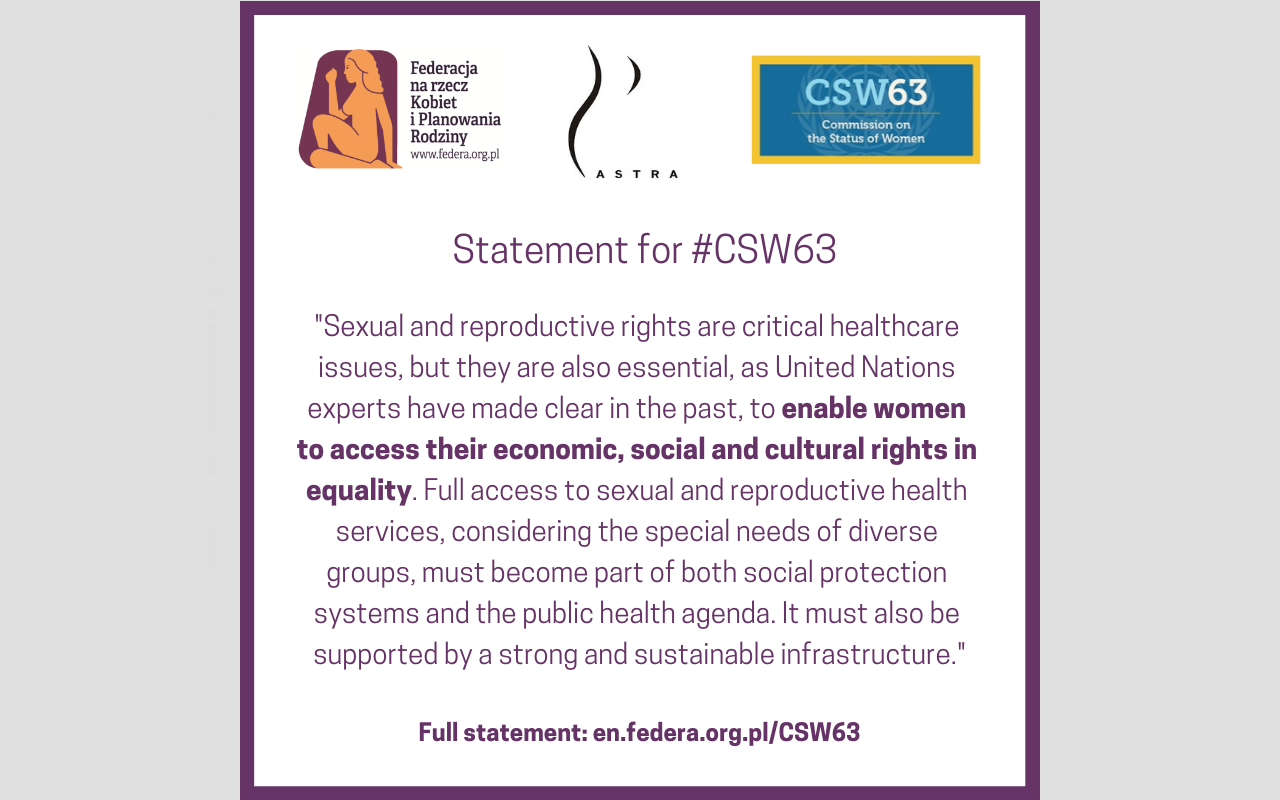 Federation for Women and Family Planning from Poland, Union Women’s Center from Georgia, “Women and Modern World” Social Charitable Center from Azerbaijan and Women’s Rights Center from Armenia are Economic and Social Council accredited organisations working in the field of women’s rights in Central and Eastern Europe and the Caucasus and operate on national, regional and international level.

We welcome the focus and the theme of the 63rd Commission of the Status of Women on gender equality and the social protection systems, access to public services and sustainable infrastructure. In particular, we would like to draw the Commission’s attention to fulfilling the sexual and reproductive health and rights of all women and girls, as a crucial component of their empowerment through inclusive social protection systems and ensuring access to reproductive and sexual health services in the public health sector.

Sexual and reproductive rights are critical healthcare issues but are also essential, as United Nations experts have made clear in the past, to enable women to access their economic, social and cultural rights in equality.

Women’s experiences in various communities are very diverse, as is the region of Central and Eastern Europe and Central Asia. Yet there are common threads among women’s issues—women continue to be most affected by cultural, social and patriarchal norms that have become institutionalized. Women and girls face inequities and inequalities – these are based on gender, however as an intersectional approach would show, aspects such as race, disability status, sexual orientation and gender identity and other social categories shape the experience of discrimination that is more often a norm than an occurrence. Women’s autonomy is being questioned and most often their access to public services is denied by means of numerous obstacles. The main barriers involve both controlling women’s sexuality and undermining women’s sexual and reproductive health and rights. If women and girls do not have the right and access to make decisions on their own body and their sexuality, they can be further pushed not only into poverty with unwanted pregnancies but also suffer poor health outcomes. A fundamental aspect of this is a disastrous impact on their health, well-being, education, social status, as well as opportunities for personal and vocational development.

At some point in life women can be exposed to risks that can drastically alter their social and economic standards of living – a strong and inclusive social protection system can ensure that women and girls get the support they really need and the services they are entitled to. Accessing safe abortions is a matter of human rights, social justice, bodily autonomy and a basic health concern. In countries where abortion is illegal, criminalized, or not effectively accessible, women resort to clandestine procedures which can lead to complications and detrimental health consequences. Regardless of noted progress in abortion-related legislation across the world, significant barriers in accessing abortion remain, let alone the widespread stigma and discrimination. Recent developments in Central and Eastern Europe have put reproductive rights of women and girls under severe pressure and once again is has become clear that these rights must often be fought for, upheld and secured. Despite the historical aspects and the context of Central and Eastern Europe, in numerous countries of the region, women’s bodies have become a symbol of national heritage and an issue of national dispute in the context of religious and medical ethics, not that of human rights and bodily autonomy.

Abortions take place every day in spite of existing barriers. The lack of abortion providers and common misuses of conscientious objection by individual doctors but also entire hospitals and even pharmacies mean no access to abortion services in entire cities and/or regions. This practice forces women to travel sometimes very far distances to obtain the service, which can be additionally hampered by mandatory waiting periods, financial barriers and biased counselling.

There are no laws or punishments that will prevent women from terminating their pregnancies, what contemporary Poland and Ceausescu’s Romania are a perfect example of. Moreover, abortion being legal on paper is not enough – it must be truly accessible, especially to those most vulnerable –people with disabilities, migrants, refugees, young women. Moreover, all women, including women with disabilities, must be protected against forced contraception or sterilization against their will or without their informed consent. Full access to sexual and reproductive health services, considering the special needs of diverse groups, must become part of both social protection systems and the public health agenda. It must also be supported by a strong and sustainable infrastructure.

We call on the United Nations and its Members States to truly commit to women’s rights and respect, protect and fulfil the right to access safe and legal abortion services and post-abortion care.