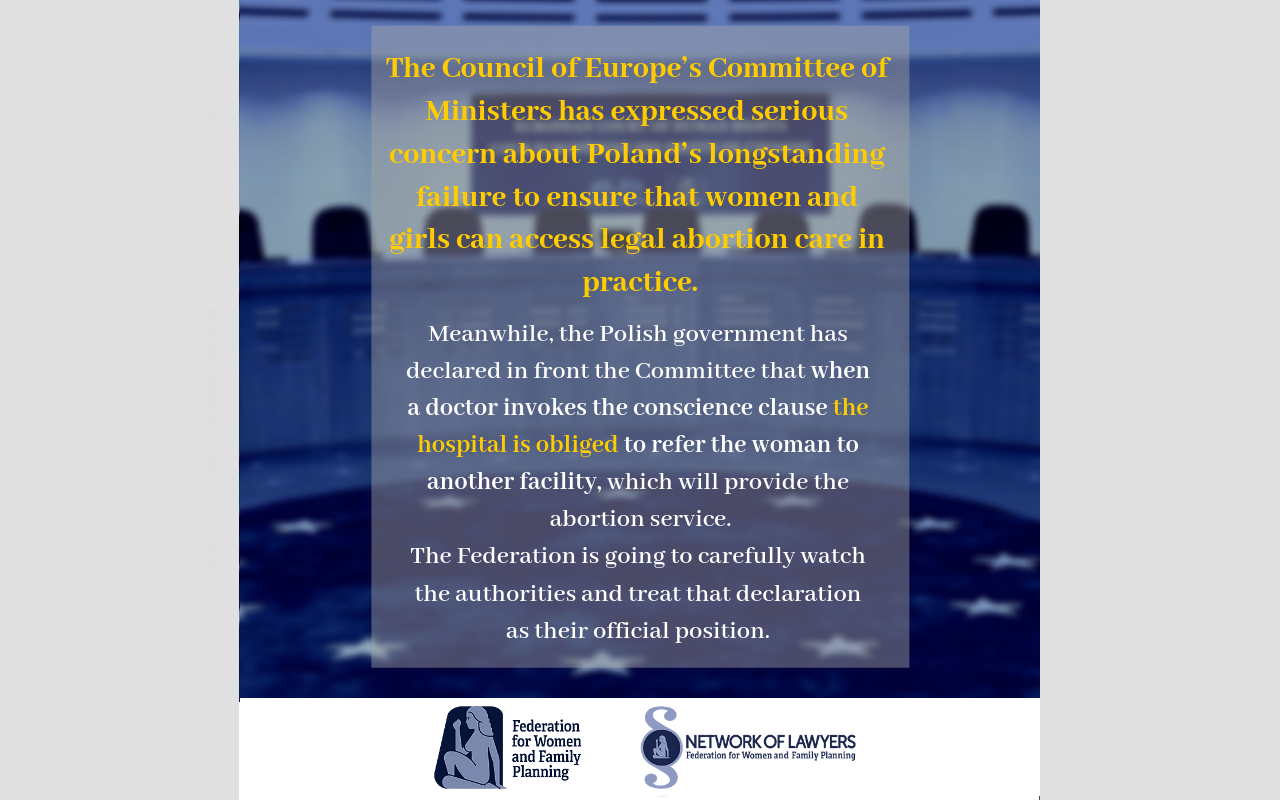 The Center for Reproductive Rights and the Federation for Women and Family Planning welcome the Committee of Minister’s decisions.

“In Poland most women are unable to access abortion care that is legal under Polish law” said Krystyna Kacpura the Executive Director of the Federation for Women and Family Planning “This is because of a failure of political will by the Polish Government. Now the Committee of Ministers has sent a clear message that this can no longer continue.”

The European Court of Human Rights has issued three judgments against Poland regarding women and girls’ access to legal abortion care. In each of the judgments the Court found that women and girls in Poland suffered multiple violations of their human rights as a result of being denied timely access to legal abortion care. The Court underlined the “striking discordance” between the right to an abortion under the law in Poland “and the reality of its practical implementation.”

“For far too long Poland has ignored its international obligations to guarantee women and girls’ timely access to legal abortion care” said Katrine Thomasen Senior Legal Adviser for Europe at the Center for Reproductive Rights, “We welcome the Committee of Ministers’ recognition that the authorities have taken no effective measures to ensure access to lawful abortion throughout Poland. Poland’s must now take urgent measures to ensure women’s access to legal reproductive health care.”

In its decision the Committee of Ministers called on Polish authorities to take a series of measures, for example: to establish clear and effective procedures, including by issuing guidelines to hospitals, to ensure that women receive adequate information on how to access legal abortion care; to enact legislation to ensure that women who are refused care by a doctor on grounds of conscience are referred to an alternative willing provider; to immediately reform and speed up the complaint procedure for women who are denied access to legal abortion. The Committee of Ministers stressed that it will examine Poland’s progress by March 2020.

The P. and S. case concerned an adolescent girl who was legally entitled to an abortion in Poland after she became pregnant due to sexual assaulted. However, the European Court found that the girl and her mother encountered repeated arbitrary and harmful behavior by medical professionals and other state authorities which severely hampered their ability to secure access to legal abortion care.

The R.R. case concerned a woman who was denied access to legal prenatal testing services and legal abortion care in Poland as a result of obstructive and harmful behavior by medical professionals and personnel. The European Court found that the behavior of the Polish authorities and medical professionals placed her in an extremely vulnerable position and denied her access to health care to which she was entitled under Polish Law.

The Tysiąc case concerned a woman whose health was placed at risk in the course of a pregnancy and who was entitled to abortion care under Polish law as a result. The European Court found that due to obstructive behavior of medical professionals and the absence of an effective and timely complaints mechanism, she was denied access to abortion care and had no choice but to continue the pregnancy, suffering serious damage to her health as a result.

H46-13 P. and S. v. Poland Supervision of the execution of the European Court’s judgments

H46-31 Tysiąc and R.R. v. Poland Supervision of the execution of the European Court’s judgments

Communication from The Federation for Women and Family Planning and  The Center for Reproductive Rights) in the cases of P. and S., R.R. and Tysiac v. Poland