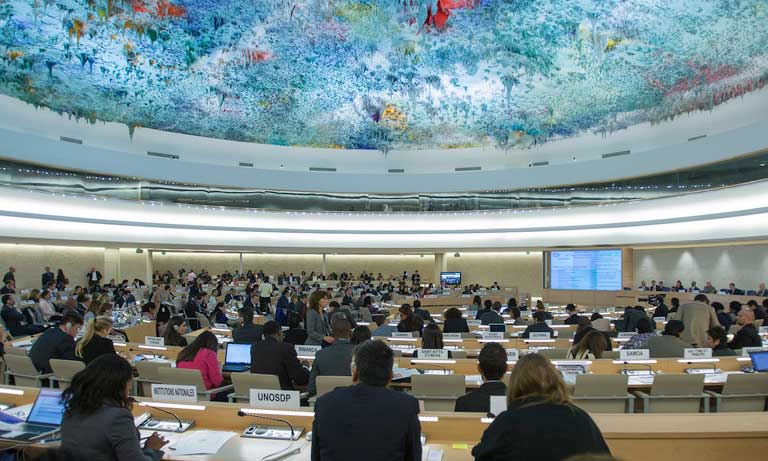 On 9 May 2017 the government of Poland presented a report in front of the UN Human Rights Council within the Universal Periodic Review (UPR) regarding the observance of human rights in Poland and the realization of i.a. the Universal Human Rights Declaration. During the 27th session of the UPR as many as five states (Slovenia, Australia, Denmark, Sweden, and Norway) recommended that Poland guarantees access to safe and legal abortion. Additionally, Slovenia recommended that Poland provides comprehensive sexuality education.

The Polish delegation referred to the recommendations of the working groups presenting facts selectively, therefore painting in front of the HRC an image of a state faultlessly realizing the right of access to abortion, contraception, and sexuality education.

Answering the question concerning access to abortion the Polish government delegation referred to the possibility to obtain the said service free of charge in three cases, under the act on family planning, human embryo protection and conditions of permissibility of abortion. What the delegation has failed to mention, however, is the fact that in practice Polish hospitals do not comply with the current law. For instance, in 2015 in the Podkarpackie Voivodeship not a single legal abortion was performed, and merely a few in eastern and southern Poland (according to the governmental report from 2015). The government delegation also failed to mention the reprehensible conduct of doctors who successfully prolong the medical and bureaucratic procedures in order to exceed the deadline to perform a legal abortion, thus enhancing the suffering of women.

The patient’s right to object the doctor’s decision

The government representatives have assured of the patients’ right to object the doctor’s refusal to terminate pregnancy. They did not add that using that appeal procedure is significantly obstructed in practice – the doctors reluctantly issue the refusal in writing, and the investigation of the case by a medical committee might take longer than the deadline to perform legal abortion. It is worth to mention that a reform of the appeal procedure that would have improved the state of the matter was withheld by the Council of Ministers during the works on the draft amendment to the Act on Patient’s Rights and the Patient’s Rights Ombudsman. The changes postulated and consulted by non-governmental organizations for months have been discarded.

The assurances of the government delegation about the full range of contraceptives available and the refund of some of them fail to meet reality. The legislative works on restricting the access to emergency contraception are under way, many medications are unavailable in pharmacies, IUD insertion procedure is very expensive even in public facilities, and only outdated generation contraceptives are refunded. Furthermore, the sexuality education conducted in Polish schools is far from reliable knowledge about modern family planning methods and imparts negative attitudes towards contraception.

The Polish government delegation has confined itself to presenting only the letter of the law, failing to show the practical aspect of the implementation of the law in Poland. The conscience clause is being overused by doctors and even entire hospitals in Poland (for instance refusals to issue a prescription for contraceptives or referrals to prenatal testing). Moreover, doctors do not want to inform about alternative ways to obtain medical services in question.

The government delegation has created a perfect image of sexuality education in the country. The situation looks completely different in reality. The “preparation for family life” classes have little in common with comprehensive sexuality education. The delegation indicated that elements of sexuality education are present in the core curricula of other subjects. However, we would like to stress that no reliable knowledge concerning at least methods of preventing unwanted pregnancies or STDs can be talked about here. Furthermore, as the report of the PONTON Group of Sexual Educators shows, in reality teachers do not touch on controversial subjects, tend to use stereotype-filled language, and present only the traditional family model.

The report prepared by the Polish government is outrageous and selective. It seems that the government representatives shed light only on the issues that speak in their favor, omitting those discreditable for them. In this context the recommendations of the states regarding the provision of the access to abortion, contraception, and comprehensive sexuality education play an even more substantial role.

All questions and recommendations directed at the Polish government delegation by other states participating in the UPR working group, as well as the answers formulated by the delegation, can be found in the final report on Poland. The government representatives might refer to the recommendations, stating their acceptance or the lack of it. Afterwards, on the plenary session of the Human Rights Council, the UN will decide whether it accepts the result of the Universal Periodic Review of Poland. Poland has the obligation to implement the recommendations and is going to be accounted for it during the next UPR session. However, special sanctions might be undertaken only in the case of a constant refusal of a member state to cooperate with the UN Human Rights Council.