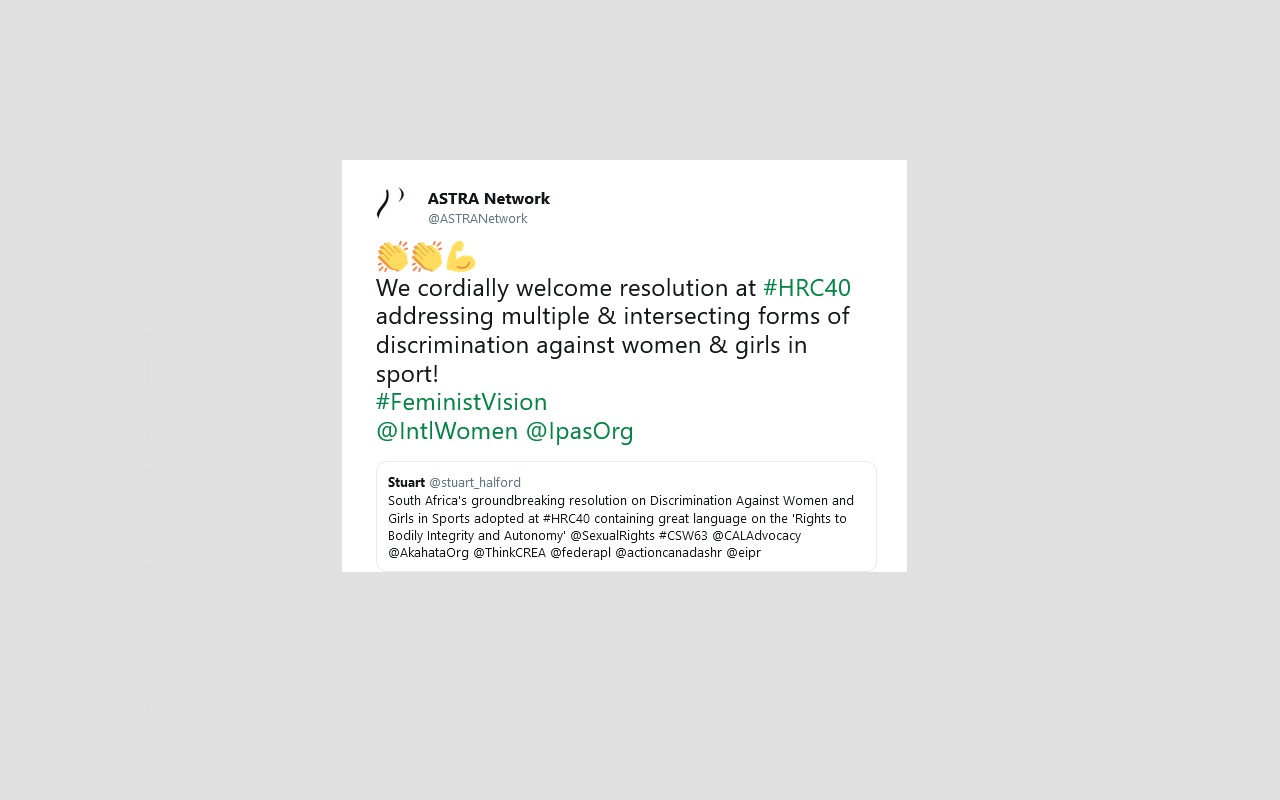 Kindly find below and attached herewith a joint statement by the Center for Reproductive Rights, the Sexual Rights Initiative, Action Canada for Sexual Health and Rights, CREA, Women Enabled International, Arrow, the Coalition of African Lesbians, the Federation for Women and Family Planning and Akahatá on the outcome of the 40th session of the Human Rights Council.

We applaud South Africa’s leadership in bringing forth a resolution on discrimination against women and girls in sports that directly addresses the human rights violations arising from the intersections of racism and harmful gender norms. The resolution highlights the discriminatory regulations that sports associations apply primarily to women and girls from the Global South and black women and girls from the Global North. With a firm grounding in all persons’ rights to bodily integrity and autonomy, the text expands the normative human rights framework to recognize the multiple ways women’s and girls’ bodies are policed, regulated and subjected to racial and gender stereotypes.

This resolution is precedent setting in its framing of discrimination against women and girls on the basis of race and also because the process was led and supported by mostly Global South States including South Africa, India, Zimbabwe, Mozambique, Zambia and Eswatini. Notably, despite joining consensus on the resolution, many traditional State champions of women’s and girls’ rights from the Global North did not support the resolution, citing mainly procedural issues. This shift from the usual geo-political dynamics on women’s and girls’ rights raises critical questions as to how the meaningful inclusion of race into global discourse changes the political landscape.

We call on all States to build on the significant normative advances contained in the resolution, to ensure that this resolution informs national and international sporting regulations for the benefit of women and girls currently subjected to coercive practices and to integrate the intersectional approach contemplated in this resolution into all resolutions focusing on the human rights of women and girls, sexuality, gender, sexual and reproductive health and rights and the elimination of all forms of racial discrimination.

Rights of the Child

We welcome the inclusion of children with disabilities in a Human Rights Council resolution on rights of the child. We would encourage other similar initiatives aiming at mainstreaming the rights of persons with disabilities throughout the work of the Council.

However, we regret the Human Rights Council’s inability to recognize the autonomy, legal capacity and right to non-discrimination of children with disabilities, including to ensure that their sexual and reproductive rights are respected, protected and fulfilled.

In a global context of roll-back against human rights, including and especially against women and girls’ rights, which disproportionately impacts the lives of groups and persons facing multiple and intersecting forms of stigma and discrimination, the Human Rights Council should ensure that the most progressive human rights standards are reflected in its resolutions.

The resolution addresses the importance of inclusive education for the empowerment of children with disabilities but fails to make the crucial linkages to the right to access inclusive comprehensive sexuality education. The CRPD Committee, the Committee on the Rights of the Child, and the Special Rapporteurs on the Rights of Persons with Disabilities and the Right to Education have established that States need to provide comprehensive and non-discriminatory sexuality education to girls and young women with disabilities, both within and outside school.

Children with disabilities, especially girls, face enduring stereotypes pertaining to their sexuality and capacities and discriminatory attitudes. At a time when treaty monitoring bodies such as the CRPD Committee and the Committee on the Elimination of Discrimination Against Women (CEDAW Committee) are increasing their joint work to address the root causes of these stereotypes and to strengthen the human rights standards on the sexual and reproductive rights of women and girls with disabilities, the Human Rights Council should strive to support this trend rather than undermine it.

The failure of this resolution to make any headway is indicative of the challenges faced by large core groups to reach consensus on strong sexual and reproductive rights language.

In addition, the outcome of the negotiations on this resolution and the tensions within each of the regional groups leading on this initiative are a direct reflection of the rise of authoritarian governments whose glorification of so-called ‘traditional values’ only further the marginalization of individuals who refuse to conform to them. The role of the Human Rights Council is to resist these retrogressive trends, instead of accommodating them.

Elimination of discrimination against women and girls in sport

Guided by the purposes and principles of the Charter of the United Nations,

Recognizing that racial discrimination does not always affect women and men equally or in the same way, and that some forms of racial discrimination have a unique and specific impact on women, and the need for explicit recognition and acknowledgement of the different life experiences of women,

Recognizing also the potential value of sport as a universal language that contributes to educating people on the values of respect, dignity, diversity, equality, tolerance and fairness and as a means to combat all forms of discrimination and to promote social inclusion for all,

Recognizing further the imperative need to engage women and girls in the practice of sport and to enhance, to this end, their participation in sporting events at the national and international levels,

Noting with concern that many women and girls face multiple and intersecting forms of stigma and discrimination in sport, and are still subjected to discriminatory laws and practices based on their race and gender, and that States have an obligation to ensure and promote a broader framework of substantive equality for women and girls,

Noting with concern also that the eligibility regulations for the female classification published by the International Association of Athletics Federations that came into effect on 1 November 2018 may not be compatible with international human rights norms and standards, including the rights of women with differences of sex development, and also concerned that there may have been a lack of legitimate and justifiable evidence for the regulations to the extent that they may not be reasonable and objective, and lack proportionality between the aim of the regulations and the proposed measures,

Noting the interim arbitral award issued on 24 July 2015 by the Court of Arbitration for Sport, according to which many variables were legitimately associated with performance in sports, including a range of physical and biological traits, as well as social and economic factors,