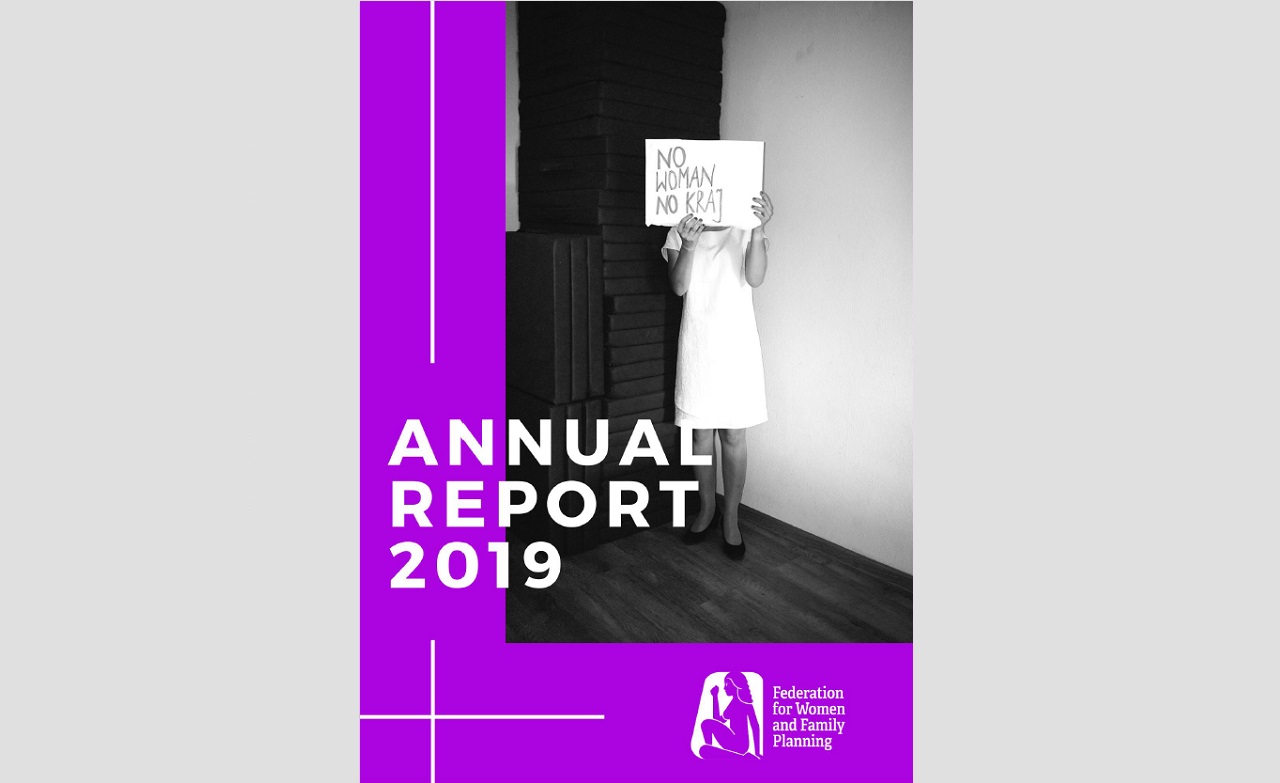 A lot happened in various areas of reproductive health in 2019, even though we did not witness mass protest in the face of antiabortion backlash. It was a busy year for the Federation. We addressed the problem of the lack of access to guaranteed reproductive health services, as well as the abuse of patient’s rights and the conscience clause. We supported protests against the sexuality education witch-hunt. To spread know-how and empowerment, we launched a patient’s and reproductive rights workshop tour and a monthly podcast in Capital Radio. We celebrated the International Safe Abortion Day by organizing a photography competition and a subsequent exhibition of selected photos. The intersectional report Institutional Violence in Poland was our take on summarizing the state of reproductive rights. Our representatives took the floor during the United Nations events – the annual Commission on the Status of Women in New York, and sessions of the Human Rights Council in Geneva, held three times a year. We also took part in the global and regional review of the (un)implemented commitments of the 1995 Beijing Platform of Action. Before we present our activities in detail, let’s take a look at the crucial events and changes of 2019.

After the October parliamentary election the motion filed to the Constitutional Court by a group of MPs, who wanted it to consider the constitutionality of abortion due to fetal pathology, expired. The day before Christmas Eve, fundamentalists filed a new motion, intending to force women to continue pregnancies despite severe and irreversible fetal defects. All in contradiction to the public opinion, the abortion reality, the Constitution, and international law. The Stop Abortion draft bill, as a civic initiative, has not expired, and will be considered in the new parliamentary term. The Federation is closely monitoring attempts to restrict the abortion law and undertakes advocacy and activism.

In 2019 there were attempts to introduce the conscience clause to pharmacies. Fundamentalists called for the right to conscientious objection to be included in the Pharmacist Profession Act. As a counteraction to this dangerous and anti-patient’s rights proposed amendment the Federation created a petition and collected 15,000 signatures, which were then handed over to the officials in the Ministry of Health. The bill is going to have to be reconsidered and adopted by the Standing Committee of the Council of Ministers.

The Federation also publicized and explained the last year’s issue of the Contraception Atlas – an annual ranking on accessibility to modern contraception methods in Europe. Based on data for 2018, Poland, with the result of 31.5 percent landed at the very bottom of the list.

In 2019, the authorities, the public media, and the extremely conservative organizations intensified attacks on sexuality education. The aim of the disgraceful Stop Pedophilia draft bill was to revoke the youth’s right to evidence-based sexuality education, as well as to threaten those who teach sex ed and provide health care to people under 18.  The ruling party’s support for the bill is undebatable. Law and Justice’s MPs called for the proposed prison sentence to be extended from 3 to 5 years. Eventually, the draft bill was referred to the Special Commission on Changes to Codification. The Ponton Group denounced the proposed law in its statement and during protests in front of the Sejm. With a vast majority of votes, the European Parliament adopted a resolution, which criticized the bill and urged the Polish parliament to reject it. MEPs also called for an increase in spending of the EU funds for non-governmental organizations, which provide sexuality education.

Warnings for the Polish authorities

In 2019 many international institutions reacted to the systemic violations of human rights in Poland. After a visit to the country and meetings with civil society representatives, including the Federation, the United Nations High Commissioner for Human Rights called on the Polish authorities to, among other things, implement the Istanbul Convention, guarantee access to legal abortion, and fulfill commitments stemming from the rulings of the European Court of Human Rights regarding access to abortion and prenatal testing.

The Federation regularly monitors the implementation of ECHR verdicts and submits communications to the Committee of Ministers of the Council of Europe. The Committee issued a decision on the state of implementation of ECHR verdicts regarding access to legal abortion in Poland. The Committee’s conclusions on all cases were similar: the Polish authorities have done nothing to ensure better access to the legal service of pregnancy termination in Poland, especially in cases of conscience clause-based refusals.

The Federation also participated in the Beijing+25 Regional Review Meeting, during which the state of implementation of the commitments from the 1995 World Conference in Women in Beijing was reviewed. Poland was the only European country, which had not submitted a governmental report, hence the importance of the Federation’s input to the international forum and cooperation in creating a regional factsheet on reproductive rights.

In November the UN World Summit was held in Nairobi, Kenya. For 25 years it has been widely considered to be the most important event concerning the implementation of resolutions of the International Conference on Population and Development. During the summit, 160 states decided to guarantee sexual and reproductive health and rights within the state health service. Unfortunately, Poland was among the 10 states which opposed the international commitments of the Nairobi World Summit.

As a result of reviewing Poland’s implementation of the Convention against Torture and Other Cruel, Inhuman or Degrading Treatment or Punishment, the UN Committee Against Torture stated that “refusal of legal abortion can constitute torture.” The final report was based, among others, on the Federation’s report created in cooperation with disability academics and sheds light on many problems, including inaccessibility of legal abortion and forced sterilization.

In 2019, the grassroots fight against manipulative antiabortion banners, gatherings, and vans continued. This fight shows the huge potential of local authorities. For example, the mayor of Bielany, one of Warsaw’s boroughs, took many steps, including a change in traffic organization, to remove a van covered in gruesome illustrations that parked in front of a local hospital. The authorities of Wrocław also freed the city’s residents from visual terror at a Christmas market and dissolved the gathering. What is the conclusion? It is worth to use the help and potential of local decision-makers. The Federation will provide legal assistance with filing complaints, submitting amicus curiae opinions, and representation in court.

After the October elections we welcomed 51 left-wing politicians in the new parliament – 49 MPs in the lower house (Sejm), and 2 in the Senate. Therefore, we are counting for attempts of progressive reforms and actions improving the access to various services – gynecological and perinatal care, accessibility of contraception and prenatal testing, and finally decriminalization and liberalization of abortion. A Parliamentary Group on Reproductive Rights was created in the Sejm, and many local authorities established Councils of Women. In Warsaw, in addition to the Council (of which our Director is a member,) the Mayor initiated a mandate of the Plenipotentiary for Women, as well as announced implementation of the Warsaw for Women program. Thus, Warsaw became the next Polish city, after Poznań, to makes sure that health care is not dependent on a doctor’s worldview. Two hospitals in the capital provide the so-called “conscience-clause-free doctor’s offices,” where you can get medical advice or a prescription without fear of an ideologically-motivated refusal.

We have many reasons for joy, or at least hope for progress in terms of sexual and reproductive health and rights in 2020. We invite you to read a summary of our activities in 2019, divided thematically (law, advocacy, education, counseling, and publishing,) and by the Federation’s programs (the Ponton Group, the Great Coalition for Equality and Choice, and ASTRA Network.)